Theme: Look inside not outside

You need seven items that look wonderful, or at least good, on the outside and are a disappointment on the inside, and one that is the reverse. Examples could include taking tins of food and swapping labels, or beautifully wrapped parcels and a grubby old bag. When you set up for the assembly have only the seven attractive items on display and leave the other package hidden with a member of staff.

Ask a pupil to select one of the prepared items and get them to open it to see what is inside. Undo the item and express disappointment, then progress through all the items. Continue to reassure the children that you know there’s something good in one of these, but you didn’t wrap them so you are not sure which one. Only after seven disappointments should the staff member offer the final package: “It can’t be this one you are looking for surely?” and, of course, it is…..

What a lot of disappointments before we got to the right one! That is probably how Samuel felt three thousand years ago when God gave him a special job to do. Samuel was sent to find the young man who was going to be the next king of Israel – the man who was king at the time, King Saul, was making a rather poor job of ruling the kingdom and God was wanting to make sure that the next king was ready. So Samuel was sent to Bethlehem (where have we heard that name before?) to find Jesse’s family, because he knew the young man he was looking for was one of Jesse’s sons.

When they all sat down to dinner Samuel looked round the room. There were seven fine young men there, all good looking and clever, and Samuel wondered which one it was going to be. But each time Samuel looked at one of the young men he could hear God’s voice in his head: “No, not this one Samuel – you are looking at what they are like on the outside, but remember God looks at what they are like on the inside”. Samuel was at a loss what to do next “Is this all of them?” he asked Jesse “Have I met all of your sons?” “Well not quite,” answered Jesse “I didn’t think you would want to bother with my youngest son David, he’s only a boy, and so we sent him to look after the sheep!”

Of course, once David arrived Samuel knew at once this was the one God had chosen, so Samuel anointed him (which means he poured holy oil on his head) ready to be king. When he was grown up David became the most famous king Israel ever had. God knew what David was like inside, and what kind of man and king he was going to be.

(You may wish to refer also to Jesus’ descent from David or comment if you have any Davids in the school.)

Pray that when we meet up with people and make new friends we get to know them properly, and not just worry about what they look like, or what they wear. Help us to be like God who knows and loves us for what we are.

Also this week – David is still a popular name – what other Biblical names are represented in the school – can you tell their stories too? 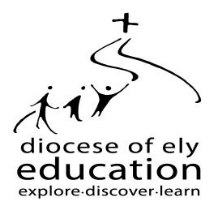